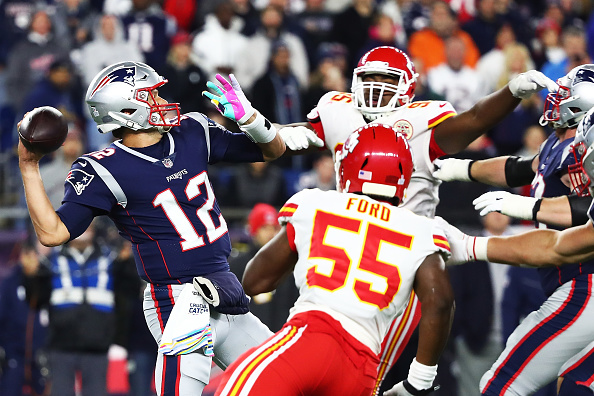 AFC Championship: Time for a Changing of the Guard?

This Sunday’s game has the chance to be historic. On the one hand it could be the passing of the torch from a legend to an up and coming star. On the other hand, it could be Tom Brady heading to his 9th Super Bowl, looking for Super Bowl ring number 6. But before we come to the outcome, we will look over the most important keys for each team. We’ll start with the Chiefs.

FOXBOROUGH, MA – OCTOBER 14: Patrick Mahomes #15 of the Kansas City Chiefs throws in the first quarter against the New England Patriots at Gillette Stadium on October 14, 2018 in Foxborough, Massachusetts. (Photo by Jim Rogash/Getty Images)

If the Chiefs are going to come out victorious against the Patriots, Andy Reid is going to have change his narrative. In his previous two games against Belichick, Reid is 0-2, and was unable to orchestrate a comeback, mainly due to poor clock management. However, this Andy Reid team is the perfect antidote to his playoff struggles, because they force him to stay aggressive with the offensive being so dynamic and the defense being so inconsistent. Reid will have to trust his young gunslinger to make the right decisions and to not settle for field goals, but go for a touchdown even if it’s 4th down. Field goals are not going to beat the Patriots.

The next key to the game for the Chiefs is the play of their QB. Patrick Mahomes vs. Tom Brady Round II. Be honest with yourself, no matter who you were rooting for, you wanted to see the young Gunslinger vs. the Goat. While every position is key to the team’s success, the quarterback by far has the most pressure. With Patrick Mahomes, playing in just his second playoff game, he will have to display the same calm presence he did against the Colts. His subtle confidence allows for the entire team to come together and not get overwhelmed. Further, Mahomes and the offense need to come out and score, to set the tone as they did against the Colts. When the Chiefs come out and score early, their defense is able to go out and take risks. Along with this, Mahomes needs to make sure to not turn the ball over and put his defense in difficult situations. The defense will need all the confidence they can get. So as long as Mahomes can put together long drives and give the defense a break hopefully the defense will be able to replicate their performance against the Colts. Patrick will not be afraid of the stage, and the whole team needs to have that same composure.

FOXBOROUGH, MA – OCTOBER 14: Tom Brady #12 of the New England Patriots throws the football during a game against the Kansas City Chiefs at Gillette Stadium on October 14, 2018 in Foxborough, Massachusetts. (Photo by Adam Glanzman/Getty Images)

The final key for the Chiefs is the defense. The biggest performance against the Colts for the Chiefs was not Mahomes, Hill, or Kelce, but the defense. The Chiefs defense, which had been abysmal against the run all season, held Marlon Mack to only 46 yards. This will be important against James White and Sony Michel, who can both run for big yards. Not allowing the run game to become established puts much more emphasis on the passing game and can allow the Chiefs defense to pin the ears back and rush the passer. But the Chiefs were not only impressive against the run, they held the Colts offense to only 6 points the entire game. Sure Vinatieri may have missed an XP and a FG, but the defense did not allow Andrew Luck to feel comfortable at all, recording 3 sacks. This pressure will be even more crucial against arguably the greatest QB of all-time. Not allowing Brady to get into a rhythm is one of the few ways to not allow him to pick apart the defense like he did to the Chargers.

The Patriots, the favorite to win the Super Bowl at the beginning of the season have found themselves in the position they always believed they would be in: the AFC Championship Game. The formula for the Patriots to win this matchup comes down to three key factors: the leadership of Tom Brady, the receivers, and the defense.

Tom Brady is stepping into his 8th straight AFC Championship game, and for one of the first times is not favored. His team is also heading into a field not named Gillette, which is definitely a little foreign for Brady. But nothing he can’t handle. For the rest of his team, they may not be as confident. Because of this, Brady needs to take control of the game from the opening minutes and even though they may be less talented than the Chiefs let his experience lead the way for his team. The conditions that the Patriots are playing may not be ideal, but Brady has played in these conditions before and will need to be able to show his team that they can succeed in these conditions. Finally, Brady will be ready to play and his example will motivate the Patriots.

The next key is people catching the passes from Brady, the receivers. Taking advantage of the Chiefs defense is going to be important and at the heart of that is the running game. James White and Sony Michel are both dynamic and if the Patriots are going to be successful against the Chiefs, the pair will need to have a day. The Colts were unable to get the running game going and therefore allowed the Chiefs secondary to be able to defend the pass without having to worry about the run. Along with this, the Patriots need to have long possessions and keep the Chiefs offense on the sideline, so they don’t get into rhythm. White and Michel will be crucial to completing this task, for if they can run for big gains and keep the clock running, then this will increase the Patriots chances of winning. Also, White and Michel can both serve as great pass-catchers and if they can put pressure on the secondary, then the Chiefs defense should not be near as solid as they were against the Colts.

The final key for the Patriots is the defense. The Patriots defense has been solid throughout the season, but they are going to have to play their best game of the season if they want to escape with the victory on Sunday. It all starts with game planning against Mahomes and not allowing him to throw for chunk yards. There are going to be times against Mahomes, that you can play perfect defense and he will still find a way to make a play. When this happens, the defense cannot become discouraged but move on to the next play. If the defense does not allow too many large plays from the Chiefs and allow them to settle for field goals instead of touchdowns like they did in the first matchup, then the defense will leave the offense in a good situation. Further, the defense needs to force Mahomes and the offense into mistakes early and allow the offense to build a lead, because the Chiefs can comeback in a hurry.

The final verdict? While the Patriots win many individual matchups, I see the Chiefs as the more complete team and coming out with the victory this Sunday night. Arrowhead, no matter the weather, will be rocking and this atmosphere will just add to the Chiefs confidence. No matter the final score, though, we should be in for treat Sunday night.