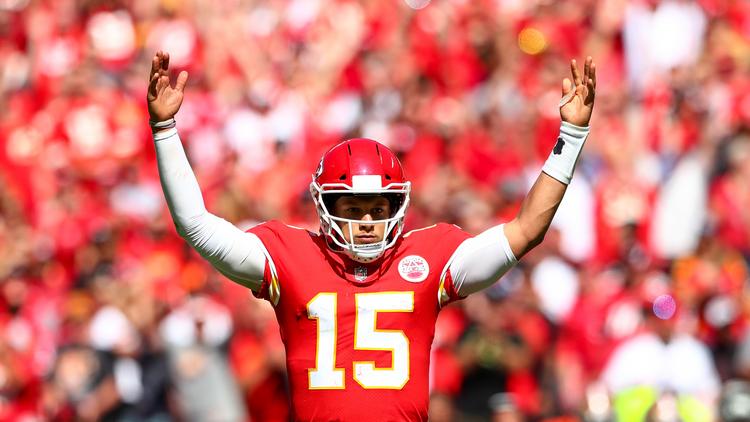 Hopkins may have finished the season as the second ranked wide receiver behind Tyreek Hill, but he was far more consistent all season. Another advantage for Hopkins was his clutch performances. Most fantasy leagues have their fantasy playoffs in weeks 15 and 16 and Hopkins outscored Hill 58.4 to 21.2 in those two key weeks.

Saint Patrick Mahomes was the only player this season to score over 400 total fantasy points. He joined Peyton Manning as the only player in NFL history with 5,000 passing yards and 50 touchdowns in a single season. The only knock on Mahomes’ fantasy season was his lackluster performances come fantasy playoff time, when he posted “only” 18 points in a crucial week 15.

Barkley became just the third rookie running back ever to eclipse 2,000 total yards. He finished the season as the top ranked running back, 0.3 points ahead of Christian McCaffrey. Barkley posted 20 or more fantasy points in an incredible 12 games this season, likely leading teams to the fantasy playoffs. The biggest negative of his season, however, was that he posted his only single digit performance in week 15, when teams likely needed him the most.

If the Panthers hadn’t rested McCaffrey after one drive in week 17, he would have finished as the top fantasy running back and he may have been able to break 400 total points for the season. For a player who was drafted in the back end of the second round in most leagues, he likely helped lead fantasy teams to a championship. He saved his best performances for the most important part of the season as well, averaging 32.3 fantasy points per game from week 12 to week 16.

According to ESPN’s average draft position (ADP), Gronkowski was the first tight end drafted and was selected in the back end of the second or front end of the third round. That’s not good for a player who posted two double-digit performances from week 7 to week 17. Gronk finished the season as the eleventh ranked tight end and was probably a main reason why teams missed their fantasy playoffs.

McCoy’s ADP was 25th overall according to ESPN. This means he was likely drafted to be a high end RB2 or even a low end RB1 depending on teams first two draft picks. McCoy finished the season as the 39th ranked running back and didn’t even perform well enough to be considered a FLEX play in most 12-man leagues. He will likely be a fourth or fifth round draft pick next fantasy season and he will come with significant risk considering he’s on the wrong side of 30.

Brady was the second quarterback drafted in most leagues and despite being over 40 years old he was expected to be a high-end QB1 this season. He finished the season as the fourteenth ranked fantasy quarterback and had fewer points then Jared Goff, Matt Ryan, and Phillip Rivers, all of whom had ADP’s over 110. If you drafted Brady in the third round (based on his ADP in a 10-man league) instead of waiting to select Ryan (2nd ranked QB) in the eleventh round, you likely missed out on your fantasy playoffs unless you drafted two quarterbacks before the twelfth round.

Fournette had an ADP of 11 overall and was the seventh running back drafted on average. He only played in eight games this season and only scored double-digit fantasy points in four of them. Fournette only played in two games in the first nine weeks, which likely really hurt fantasy owners’ chances of making the playoffs. If you somehow made the playoffs with Fournette on your roster, you likely played him in the first round because he was actually healthy. I’m sorry if you overcame his shortcomings all season and believed enough to start him week 15 because he once again posted a single-digit performance.

We all know how valuable Le’Veon Bell was to fantasy teams this season.

Where I Was Wrong

Throughout the offseason and during the season I made predictions for this fantasy season. These predictions turned out to be completely wrong.

In my article Fantasy Football Preview: Same Faces in New Places I wrote, “Throwing to Adam Thielen, Stefon Diggs, and Kyle Rudolph all season will work out a lot better than throwing to Jordan Reed, Terrelle Pryor, and Josh Doctson. Cousins finishes as a top-5 quarterback.” While Cousins did have much better offensive weapons surrounding him, he finished outside of the top-10 fantasy quarterbacks for the first time in the past four seasons.

4. Nick Chubb finishes outside of the top-35 running backs

In my article Fantasy Football Preview: Rookie Running Back Edition I wrote, “Believe it or not, there’s too much talent on the Browns offense for Chubb to have a productive rookie fantasy season. He finishes outside of the top 35 running backs.” With Carlos Hyde leading the Browns backfield at the beginning of the season it looked like my prediction would be correct, but once Hyde was traded to Jacksonville, Chubb took off. Even though Chubb didn’t start a game until week 7, he still finished the season as the seventeenth ranked fantasy running back.

3. Royce Freeman finishes as a top-20 running back

In my article Fantasy Football Preview: Rookie Running Back Edition I wrote, “Freeman should be the lead back by week 3 or 4 at the latest. He finishes as a top-20 running back.” I initially thought Freeman’s biggest competition for carries would be Devontae Booker, but undrafted free agent Phillip Lindsay took over Denver’s backfield and ran away with it. While Lindsay finished the season as the thirteenth ranked running back, Freeman’s touches were limited and he finished outside of the top-40.

2. Telling owners to sell high on McCaffrey after week 8

In my article Mid-Season Fantasy Football Awards I wrote, “McCaffrey averaged 22.5 touches per game in his first four games, but in his previous three games he’s averaged 15.3 touches. Losing around eight touches per game is huge in fantasy. As of right now I consider McCaffrey as a middle of the pack RB2. If you can trade him for a slight upgrade at either running back or wide receiver, now’s the time to do so.” I personally think Norv Turner must have read my analysis because McCaffrey started getting more touches and averaged an absurd 31 fantasy points per game from the time I wrote it until week 17.

In my article Fantasy Football Preview: Same Faces in New Places I wrote, “He should be able to score double-digit touchdowns rather easily playing as a red zone threat for Aaron Rodgers this season. Graham finishes as a top-3 tight end.” My projection of Graham catching double-digit touchdowns was by far my worst prediction of the season. He finished the year as the twelfth ranked tight end and only caught two touchdowns all season. Stay away from Aaron Rodgers tight ends until further notice.

Where I Was Right

Throughout the offseason and during the season I made predictions for this fantasy season. These predictions turned out to be completely right.

5. Mike Williams finishes as a top-30 wide receiver in Non-PPR

In my first fantasy football article, 2018 Fantasy Football Sleepers, I was only writing about Non-PPR scoring and I wrote, “Standing 6’3’’ 218 pounds he provides a large target for Rivers to throw to next to pro bowl receiver Keenan Allen. With his talent level I could see Williams finishing inside the top-30 receivers this season.” Williams was the 69th ranked wide receiver according to ESPN’s preseason rankings and I thought he could more than exceed that ranking. In Non-PPR scoring Williams 11 total touchdowns helped him finish as the 20th ranked wide receiver.

4. Telling owners to sell high on DeSean Jackson after week 4

In my article Fantasy Football Awards: 1 quarter into the Season I wrote, “With Jameis Winston officially being named the starter for Tampa Bay this week, it’s time you find a trade for DeSean Jackson. Last season with Winston at the helm, Jackson recorded 668 receiving yards and 3 touchdowns. This year with Fitzpatrick, he has already recorded 424 receiving yards and 3 touchdowns. Fitzpatrick was averaging 10.5 yards per pass attempt this season, which benefitted Jackson greatly. Winston has a career average of 7.5 yards per pass attempt and he didn’t show much success with Jackson last year. Look to trade Jackson this week.” In the first four weeks Jackson averaged 19.4 fantasy points per game. Since my writing telling owners to sell high on him, he averaged 6.2 fantasy points per game over the next 12 weeks.

3. Nyheim Hines finishes as a top-35 running back

In my article Fantasy Football Preview: Rookie Running Back Edition I wrote, “He might not be worth owning early in the season, but once he breaks a few big plays he could take over the starting position and run away with it. He finishes inside the top 35 running backs.” While Hines never took over as the lead back for the Colts, he was used as a change of pace back and was a dangerous receiving weapon for Andrew Luck. Hines finished the season as the 27th ranked running back.

2. Kalen Ballage finishes outside of the top-50 running backs

In my article Fantasy Football Preview: Rookie Running Back Edition I wrote, “Best-case scenario, he becomes Drake’s backup. He will finish outside of the top 50 running backs.” ESPN’s Matthew Berry was extremely high on Kalen Ballage all summer and he was Berry’s biggest sleeper coming into the season. I’m proud to say I was completely right and Matthew Berry was completely wrong about Ballage. With Frank Gore and Kenyan Drake sharing the backfield in Miami for the majority of the year, Ballage only two games with more than five carries and he finished the season as the 89th ranked running back.

1. Saquon Barkley finishes as a top-5 running back

In my article Fantasy Football Preview: Rookie Running Back Edition I wrote, “Expectations are high and I think he will live up to them. Barkley will be utilized similar to how Arizona uses David Johnson. He finishes as a top-5 running back.” Barkley actually finished the season as the top ranked fantasy running back, which almost nobody could have expected. While he was drafted in the first round of just about every fantasy draft, it’s always a risky move expecting a rookie to carry your fantasy team. Barkley was arguably the best running back prospect of this decade and I knew he would live up to the hype.